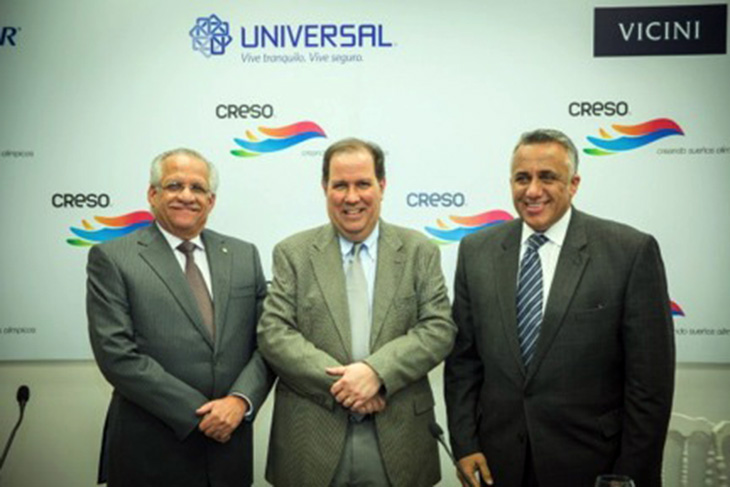 CRESO Incorporates the Universal Group as a New Investment Partner

Creating Olympic Dreams, CRESO, formalized an agreement that incorporates Universal Group as an investor partner to this entity, whose mission is to invest in sports development and academic training of more than 80 top athletes Dominicans.

Mr. Vicini emphasized that the project CRESO is a complement to the resources provided by the Dominican State in sport and its primary focus is to invest in high-Olympic athletes performance, accompanied by academic training, providing them with tools that allow them to work in any field of sport or other area in which they have been trained professionally.

“The addition of Universal Group represents an important step that will certainly reflect CRESO positive results in our programs to support high performance athletes, while opening a space for integrating new disciplines and prepare them to compete in most sports arenas important in the world, “said Vicini.

Mr. Izquierdo said “part of the companies belonging to CRESO underscores our support for sport and human values ​​conveyed practice thereof, as are results oriented, spirit of excellence and continuous improvement. We are honored to continue supporting promising young sport from an entity that is engaged in making their goals and dreams, while to position our country internationally. “

For his part Mr. Mejía said that this is a win-win partnership for high performance sport, to our athletes and to the country. “This will result in generating greater participation and commitment of the athletes, as well as an expansion of sports activities to the international competitive instances that make up the current Olympic cycle, such as the Central American and Caribbean Games, which in its 22th edition will have as based Veracruz, Mexico in November and we have confirmed the classification and participation of 70 Dominican athletes belonging to CRESO “.

Universal Group is the ninth corporation entering CRESO and since 2010 is made up of business partners com Central Romana Corporation, Clear, Ferquido, Sociedad Industrial Dominicana, Banco Popular Dominicano, Grupo Rica, Dominican Sun Company SA and Vicini, along with the Committee Dominican Olympic sport technique as entity. The initiative expands freely to focus their contributions to the Olympic Cycle Actual ending with the Olympics in Rio de Janeiro 2016.

President CRESO motivated than other leading companies of the country to join this project thus help generate greater opportunities for Dominican Republic in more places at international events such as the 2015 Pan American Games in Toronto and the Olympics in Rio de Janeiro to be held in Brazil in 2016.

Executives from the company CRESO, president and representatives of sports federations and members of the sports media and mainstream media attended the event.