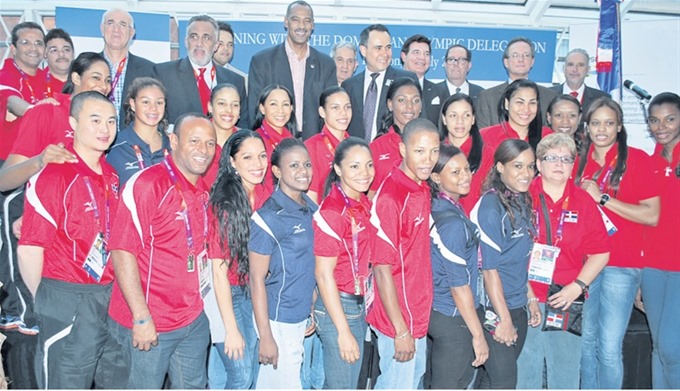 Creando Suenios Olímpicos (CRESO) came all the way here with its main supporters to encourage the 35 Dominican athletes that will participate in the 2012 Olympic Games.

A delegation headed by Mr. Felipe Vicini, president of CRESO and of VICINI, and also integrated by Manuel Alejandro Grullón, chairman of Banco Popular, and Julio Brache, vice-president of Grupo Rica, came to London, alongside Dominican Ambassador to the United Kingdom, Federico Cuello Camilo, and hosted a reception to the Quisqueya delegation, in the Millenium Hotel in London. “we have come here to manifest our support and encourage the interest that they represent the country duly”, said Vicini in a brief speech. He spoke of the importance of “competing with gallantry and winning medals, but the most important part is to participate as preached by Baron Pierre de Coubertin”.

Participants: During the activity, which also featured the presence of the Minister of Sports, Felipe Payano, Luis Mejía and Antonio Acosta, president and secretary-general respectively of the Dominican Olympic Committee (COD) , and Dr. José Joaquín Puello, Chairman Ad Vitam, among others, also spoke Ambassador Cuello Camilo, whom exhorted the athlets to compete honorably and try to bear high our standard, much higher”. He wished all the athletes “to attain the best of successes for the glory and honour of all Dominicans”. “The Dominican delegation comes proudly to defend the colours of our standard and the values of our nation”, said Luisín Mejía, amid his speech before a vast amount of attendees whom shared with the Dominican athletes. “This is a stimulus we deserve”, he said, after thanking the support the athletes have received  on behalf of the Government, especially by the Minister of Sports, Felipe Payano, of CRESO and of the Dominican Embassy in London.

At the activity also spoke the standard-bearer of the Dominican delegation and Olympic medalist, Gabriel Mercedes, whom reiterated that the Dominican athletes “are prepared to give the best within ourselves to represent the country well”. Prior to the commencement of the reception, a violinist, Aisha Syed played masterfully the Dominican Republic Anthem. The gathering was also enlivened by a musical ensemble whom played typical Dominican music, especially merengue and bachata.

DR DOES NOT FEAR CONTROLS

Dr. Milton Pinedo, medical chief of the Dominican delegation that will take part in the London 2012 Olympics, affirmed here yesterday that he does not dear the anti-doping controls that will begin today, prior to the inaugural ceremony. “We have good control over our athletes. They are well”, said Pinedo, whom participated today in the first medical meeting of the Games.

The WADA Medical Commission, which is the entity responsible for controlling the usage of prohibited substances in the Olympic events, will begin today by taking samples from all athletes competing in the Olympics. “This is a process that is maintained before and during the course of the games”, expressed Pinedo. He was very commanding in affirming that the Dominican athletes are in good health and that the minor injuries that affected some of them, have already been overcome. “We have a healthy delegation. We are working permanently, by following up on all of them”, said Pinedo. Control starts today on all delegations. Athletes will be selected randomly and samples will be taken for analysis.